Home > About Us > Modern Signal Blog >Responsive Design without a Redesign

Responsive Web Design without a Redesign

In November 2012, Modern Signal launched a redesign of our site.  We were (are!) very proud of how it looked and the ways it would allow us to keep future and current clients better informed.  One problem: it wasn't responsive.  Our redesign had been in the works for a while, and the design had been approved and finalized before we became fully aware of a new reality: because of the proliferation of smartphones and tablets, modern websites must adjust to a wide variety of screen sizes.  They must be responsive. 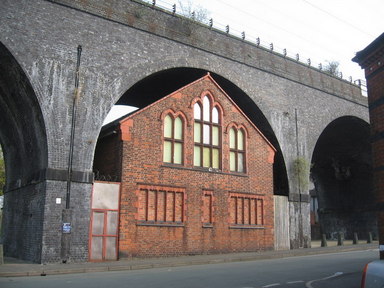 Square Peg in a Round Hole  © Copyright Sue Adair and licensed
for reuse under this Creative Commons Licence.

The problem was that we had just invested considerable time and energy in redesigning our site. We were happy with the way it looked on desktop browsers, and we didn't want to start over.  The question arose, can we keep our design and just make it responsive?  This same question has started to come up with many of our clients too, and so it was definitely worth investigating.

If you ask a designer whether you need to start from scratch to make your site responsive, they are likely to say, more or less, yes.  That is, you may be able to keep much of the overall look and feel of your site, but you'll have to rethink so many things you are better off starting over.  I'm not a designer, though.  I'm a developer with years of experience in the trenches with html, css, and javascript.  And so in my usual naivete I thought, "How hard could it be?"

The answer to this question is, of course, "It depends."  The designers are right in that you have to rethink many of the visual elements of your site in order to make it responsive.  You likely have a top navigation bar with drop-down menus.  You likely have a side navigation bar which will not fit on smaller screens.  You may have some fixed-width background images that are not going to expand and contract the way they need to in a responsive site.  The Modern Signal site had all of those things.

In the end, though, all of these challenges were surmountable with css, elbow grease, and just a little bit of targeted redesign.  I'll take you through how we tackled these challenges.

"What Needs to Change?"

The first step in making any existing design responsive is to walk through the site to identify things that have to change.  Mainly you are looking for:

There are other less well-defined things you might want to consider, like how much content people will comfortably scroll through on a phone, but these are the biggest red flags.  In our site this list brought up:

So, knowing what I needed to attack, I dove in.

First things first.  We had become familiar with Twitter's Bootstrap framework.  We like it for its attractive set of widgets as well as it's framework for building responsive sites.  The first step, then, was to integrate the Bootstrap CSS files and change the html of the site to use the Bootstrap concepts of "rows" and "spans".  I won't delve into this too much as I doubt there is much I can add to the information already available.

"How to Go from Fixed-width to Expandable?"

Our right navigation presented an immediate problem: it used fixed-width background images in order to give it a distinctive banner look and feel:

The html and css looked very like this (only including relevant css):

This is simple, effective and ... not responsive.  In the end, I ended up coming to terms with an ugly fact: I couldn't fix this with css alone.  At least not with the css available to me (maybe I can ignore IE6, maybe even IE7, but not IE8!)  I would have to add a little html to make it work.  What I ended up with was:

On to the next challenge...

"How to Unclutter the Top Navigation?"

Our top navigation is a relatively simple line of links with drop-down menus that appear when you hover over the links.  They wrap fine, but get pretty jumbled on small, phone-size screens.  They also use hover actions to display submenus, which doesn't work on devices that use touch screens.

Here is a case where simply rearranging the existing design elements didn't work.  We needed to rethink the design a bit.  The default Bootstrap template deals with this by transforming the navigation into a single button that displays a drop-down of the entire menu when clicked.  We ended up using the same idea: 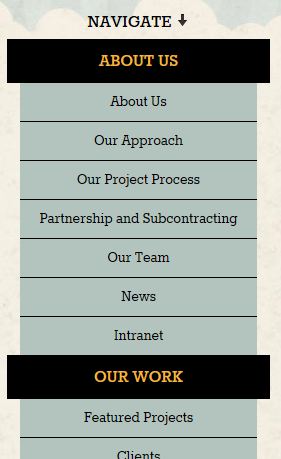 What's important to note about this is that we didn't need to rethink the design of our entire page to accomplish this -- we just had to rethink this one element.

"What About the Carousel?"

Our next challenge was dealing with the carousel on our home page.  Large home page carousels are very popular on websites nowadays.  They're splashy and can be used to draw the visitor's attention to news, products, featured services, etc.  They usually, however, take up the full width of the page and so present a problem for responsive design.

So, it's a common problem, which is fortunate.  I quickly found Flexslider, which handled most of the responsive challenges for me.  It took very little time for me to replace our current carousel code with Flexslider.

We still had a problem, though.  The items in our carousel contain images and text.  We can make the images progressively smaller, but at some point we just don't have enough room to make the text fit over the images without making the text too small to see.  The answer for us was to hide things progressively as the page width gets smaller.  This is very easy to do using some built-in Bootstrap classes.  If you want something to be hidden on tablet-sized devices or smaller, use the "hidden-tablet" class:

If you want something to be hidden on phone-sized devices or smaller, use the "hidden-tablet" class: 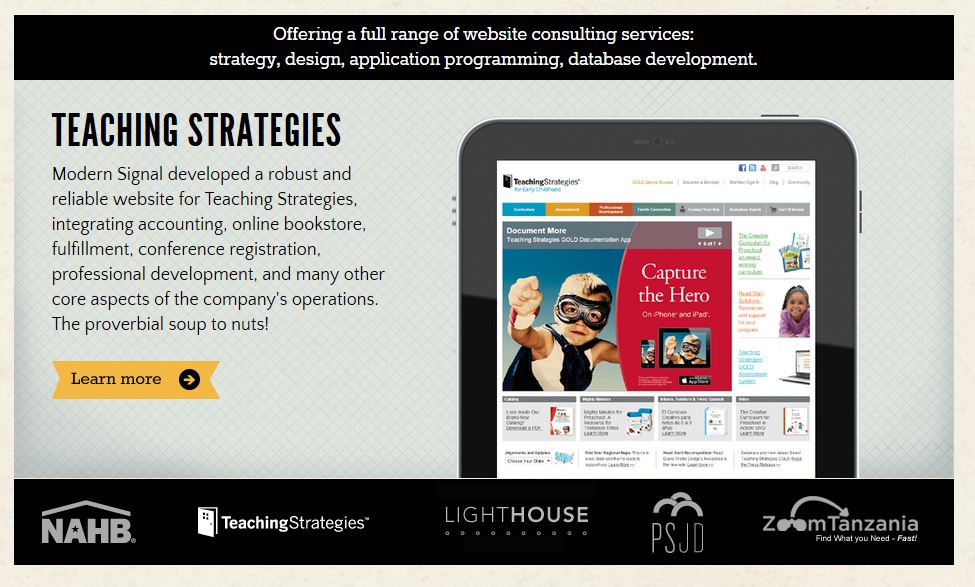 on large devices to: 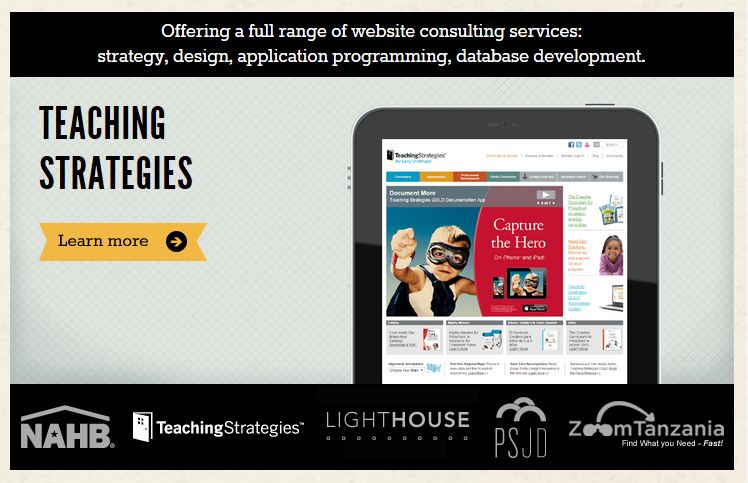 on medium-sized devices to: 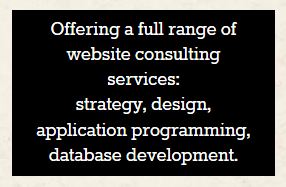 In the end, we're very happy with the results of the responsive web design overhaul of our site.  We got it done much faster and cheaper than we would have had we gone back to the design phase.  Of course, if we had been in the market for a full redesign anyway, we would have done that, but we were happy with our design and just wanted to add some responsive sugar to it, to in effect make it a mobile website and a tablet website as well as one that looks good on the desktop.  We have heard from a lot of people who are in the same boat, and I hope this post gives heart to those who would like a responsive site but are not ready for a redesign.

Interested in implementing responsive elements on your own site? Download this checklist of things you should keep in mind.